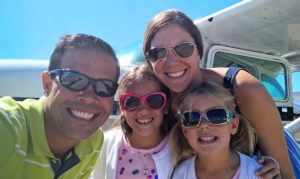 Today I am a full time husband and father of two, a successful real estate agent, occasional weekend pilot and now a drone photographer. While it is mostly history now, my background in aerial survey and my flight aspirations are largely responsible for where I am today.

I had high aspirations of becoming an airline pilot when I was introduced to the aerial survey industry in 2003. I was working line service at my local airport when I learned about an aerial survey company based on the field. I initially viewed a position with Keystone Aerial Surveys, Inc. as a time builder for my airline career and signed up for a job as a camera operator. It did not take long for me to realize that the airlines were not the future for me. I was checked out on the Piper Apache less than six months after starting as an operator and continued to build my flight time in aerial survey over the next few years as my role gradually changed.

The introduction of more sophisticated equipment and sensors at Keystone provided me with an outlet for my techie interests. I was able to spearhead a major advancement in flight management system technology and update almost all aircraft system installations to include full time differential GPS capabilities. I also helped make the advent of direct digital with the UltraCam successful at Keystone. All of these technology advancements beckoned for new and appropriately efficient workflows as a growing digital capability increased the demand for a new wave of large acquisition projects. In my role as a project manager, I worked to implement a framework that could be used for all projects regardless of medium or deliverables. The goal was a flexible yet inclusive template for the rapid movement of new projects through acquisition phases while clearly defining the required quality assessment guidelines and processing requirements. The post-acquisition processing, quality control and delivery preparation components of the framework were devised for scalability so that projects of all sizes could move through the same system with the only real difference being the data volume.

I had the opportunity to develop and implement my project management philosophy and techniques while overseeing the planning, acquisition, and post-production of hundreds of individual areas-of-interest for numerous clients.

Looking for a new challenge, I joined LeadAir in early 2013 to help with organization and management. This arrangement quickly turned into more of a system support role where I was the front line interface for clients operating both the latest MIDAS Oblique systems and some legacy equipment.

With over eleven years in the aerial survey industry, I have experience with: